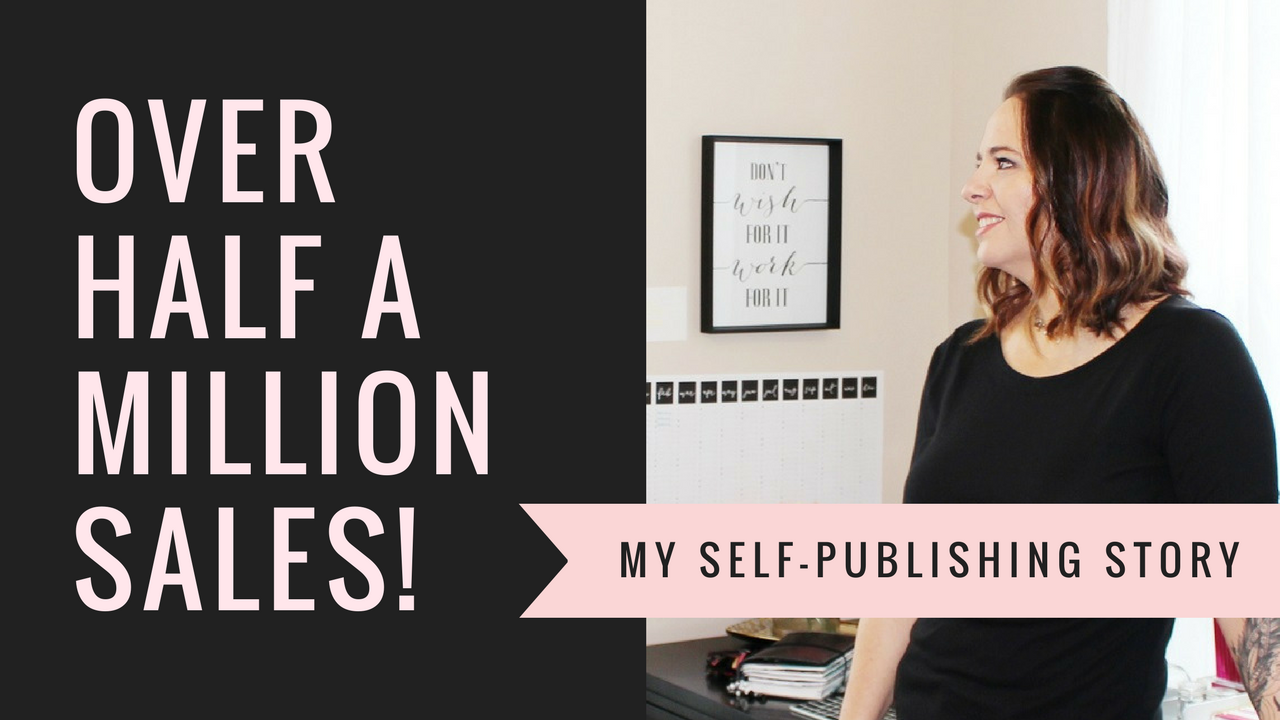 How I Sold Over Half A Million Books Self-Publishing

I am so excited to have the chance to talk about how I sold over half a million books so far in my self-publishing career.

I self-published my first book, Beautiful Demons, back in October of 2010, and since then, I have sold more than 600,000 copies of my books. Of course, there are a lot of different factors that go into selling that many books, and it hasn’t been easy by any stretch of the imagination.

How Do I Market My Books?

However, there are definitely some major strategies I’ve learned along the way that I am dying to share with you. One of the top questions I am asked by new authors looking to self-publish is how do I market my books? How do I find the readers?

While there are a ton of great marketing techniques that we’ll be discussing over the course of the next few months, it really all starts with the books you publish.

You can set yourself up for success right from the beginning by following some of these basic strategies. And believe me when I say that no amount of great marketing in the world can overcome some mistakes like poor branding, terrible quality, or bad genre placement.

In today’s video, I talk about my path to success and my top strategies for selling over half a million books. If you’d rather read than watch, keep scrolling down to read more of this post.

Ever since first self-publishing back in 2010, I have self-published about 23 books. Many of these have been in different series and different genres. However, what really helped me achieve success and momentum right from the start was sticking to a single, well-branded series with focused releases.

Rather than branch out to a lot of different genres or series in the beginning, I stayed focused on a single series. Readers knew exactly what to expect from me and what was coming next at all times. I also published the first few books in my series relatively quickly, which I believe helped with my momentum. Here are my top strategies that I believe helped me succeed early on.

Writing In A Single Series

For me, this was my Shadow Demons Saga (Formerly titled the Peachville High Demons Series). I published 6 full-length novels in this one series before I branched out to write anything else. This made it absolutely clear to readers what they should pick up next from me. It also meant that if people were interested in that first book, they had something else to pick up in that same series. Staying focused also meant my readers–and my sales–were focused. This led to exponential growth.

Rather than hopping between genres and different series, I focused my releases into a single series with often no more than 3 months between books. When I first published the second and third books in my series, I only put 2 months between releases.

After that, I did have a bit more time between releases (4-5 months for Books 4 and 5 and 11 months between 5 and 6 since I gave birth to my son and took some time off), but I didn’t release anything in any other series until I had 6 books in that first series.

It helps so much when readers know what to expect from you and you don’t give them too much time in between to move on and forget about your series.

Everything from cover art to my website, my formatting, and my titles were all very well branded. It was easy for a reader browsing thumbnails of books on any vendor to see that my books were connected. My name and title were both easy to read, and the look and feel of the series was cohesive and easy to spot.

My titles were also easy to connect. Beautiful Demons. Inner Demons, Bitter Demons. etc. At a glance, it was easy to see on multiple levels that these books belonged together.

If you look at most popular series, you will notice that they are tightly branded within the series. This is one of the most important elements of building a bestselling series, and from there, a bestselling career as an indie author.

First Book As A Loss Leader

Something else that really helped to build my series and my sales was to always use the first book in my series as a loss leader.

From the beginning, Book 1 in my series was only 99 cents. I did this on purpose to try to bring as many people into my series as possible.

Even if you don’t sell your first book for 99 cents, I would highly recommend dropping the price of that first book every time you release a new book in the series. This will draw a constant flow of new readers into your series.

Eventually, I did set that first book free, which in turn brought hundreds of thousands of new readers into my series.

I Wrote What I Loved

Maybe this should go without saying, but I always write books I love. Rather than chasing trends just to make money, I always write stories I am passionate about.

If you’re not loving writing something, you’re going to get burned out and you’re not going to want to keep doing it. Not loving the story is also bound to show through in the writing itself.

One of my top tips is to always write genres and stories you love.

One of the single most important things I did to keep my career building over time was that I became a better writer. This might go without saying for many of you, but I feel like it needs to be mentioned.

None of us is ever a perfect writer. None of us ever reaches a point where we’ve learned as much as we can and will never get better. There is always more to learn, and if you stop working on the craft of writing, you will most likely also see your sales decline over time.

Constantly working on my abilities as an author has been key to continuing to build my sales and satisfy my loyal readership.

Between releases, I did what I could to keep my fans engaged. I did this through social media, my website, and my newsletter list.

I wish I had started my newsletter at the beginning of my career, but once I did start having readers sign up, this was a very useful tool for me in building my career and letting existing fans know about my newest releases.

I also released a few short stories and exclusive novellas related to the series to keep my fans waiting for more when I needed the time to work on the full-length novels.

As you can see, one of the best things I did for my career was to write in a single series with focused releases. I call this my “anchor” series.

If you are interested in learning more about what an anchor series is and how you can build one of your own, I hope you’ll subscribe to my newsletter or my YouTube channel to be notified when new posts about building an anchor series go live.

Are you ready to take the next step toward the writing career of your dreams? Sign up here!

As a bonus for subscribing, you'll receive my free guide, "Everything You Need Before You Self-Publish".

Knowing exactly what information you need and what decisions you have to make before you publish your book can sometimes feel overwhelming.

Let this free guide lead you through the steps toward making your first book available now! Download today for free.

You're in! Now check your email to confirm your subscription.

Over the next few weeks, I’ll be talking in depth about the various elements of an anchor series. If you’re interested at all in figuring out the best way to build your indie career, you won’t want to miss this upcoming series! The first post explaining what an anchor series is will go up this Wednesday.

In the meantime, I’d love to hear your thoughts. Which of these top strategies resonated the most with you? Are you interested in hearing more about building an anchor series? Let’s discuss it in the comments below!