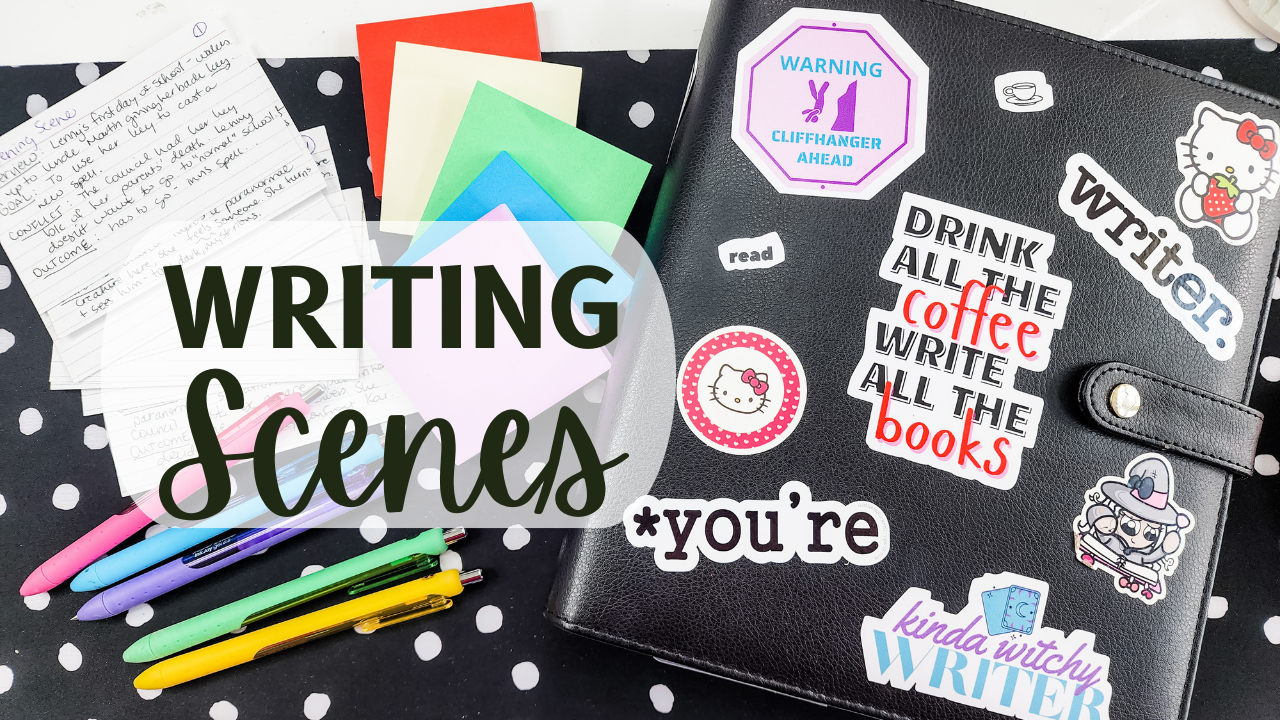 As writers, we hear a lot about plot structure, but in my opinion, we don’t hear nearly enough about scenes. In truth, scenes are really where the story happens. So, if you’ve ever struggled with figuring out what happens in your scenes or taking the idea of plot and fleshing it out into individual scenes, this series is for you.

Over the next few weeks, I’ll be sharing a five-part series on writing great scenes that keep your readers engaged and turning pages late into the night.

As usual, I also created an awesome free workbook to accompany this series. You can find that in the HB Resource Library if you’re a newsletter subscriber, or you can sign up below and receive the download immediately!

Keep reading or head over to YouTube to watch today’s video!

With plot, you have an overarching structure. You have the frame of your novel, which is great, but a lot of writers get stuck there, trying to figure out how those plot points actually connect and play out on the page.

Imagine you’re building a house. You need the frame, right? It’s the foundation and structure of your home, but it’s still not liveable until you fill it in with walls, drywall, ceilings, flooring, appliances, decor, lights, all that good stuff.

Your story is the same way. It needs some kind of structure, but the high-level structure isn’t enough to make it readable. That’s where scenes come in. All the action, character development, world building, dialogue, all of it takes place inside scenes. You may have heard the phrase before that scenes are the building blocks of your story, and this is so true.

What is a scene?

Webster’s dictionary defines a scene as “a single interesting or important happening in a play or story”. Some writers say that it’s any time you have a change in location or characters. In researching this series, I realized there are a lot of different definitions of what a scene is, so my advice to you is not to get hung up on the definition so much because it seems to be vague and more of an individual choice of where one scene ends and another begins.

Sometimes, it might be less obvious. If your couple leave the restaurant after their date and have a conversation while walking down the street, is it a new scene just because they change location? You get to decide that for yourself.

I personally think of it in terms of transitions. A new setting, a new character, someone leaving the room, a new event or significant transition of some kind signals a new scene. Each scene is its own little ministry, and I think most of us can intuitively feel that shift to a new part of the story. A new segment.

To be clear, scenes and chapters are not exactly the same thing. Some writers might start a new chapter every time there’s a new scene, but it’s not necessary to do this. One chapter might have multiple scenes. That’s also a matter of personal choice and writing style, but I wanted to be clear that we aren’t talking about chapters in this series. We’re discussing scenes, which in my mind are usually the individual sections of your story separated by some kind of transition or change.

Components of an Engaging Scene

Here are a few things that are essential for writing a great scene.

What You Can Expect Out Of This Series

In this 5-part series, we’ll be going through some of these components in a lot more detail. We’ll discuss how to choose which point-of-view a scene belongs to, why your character needs a goal or desire in each scene, and how scenes play into character arcs. We’ll talk about conflict and intensity, scene structure, including the idea of scenes and sequels in pacing your scenes, and we’ll also talk about how each scene organically connects to the story or plot as a whole.

Once I really saw how each scene is organically connected to the story as a whole, I became a much stronger writer. I hope this series is going to help turn on some light bulbs for you if you’ve struggled with scene structure, conflict, or trying to decide what happens in each scene as you flesh out your plot.

As always, I want to acknowledge some of the talented writers and teachers I’ve learned from along my own writing journey, so you’ll find a list of books and resources I’ve enjoyed most in the free workbook (again, if you’re not signed up for my mailing list, you can do so below). I put a lot of time into this, and I sincerely hope you find it helpful.

Then Next Thursday, we’ll deep dive into this first element of a scene and talk about how character arc and your character’s goal or desire plays into each scene and why this is essential to keeping readers engaged and turning pages. Hint: It’s all about cause and effect.

Top 10 Tips For A Successful Writing Retreat
How To Plot Your Novel, Part Three: Elements of Act One
How to Write Faster & Win NaNoWriMo (Preptober)