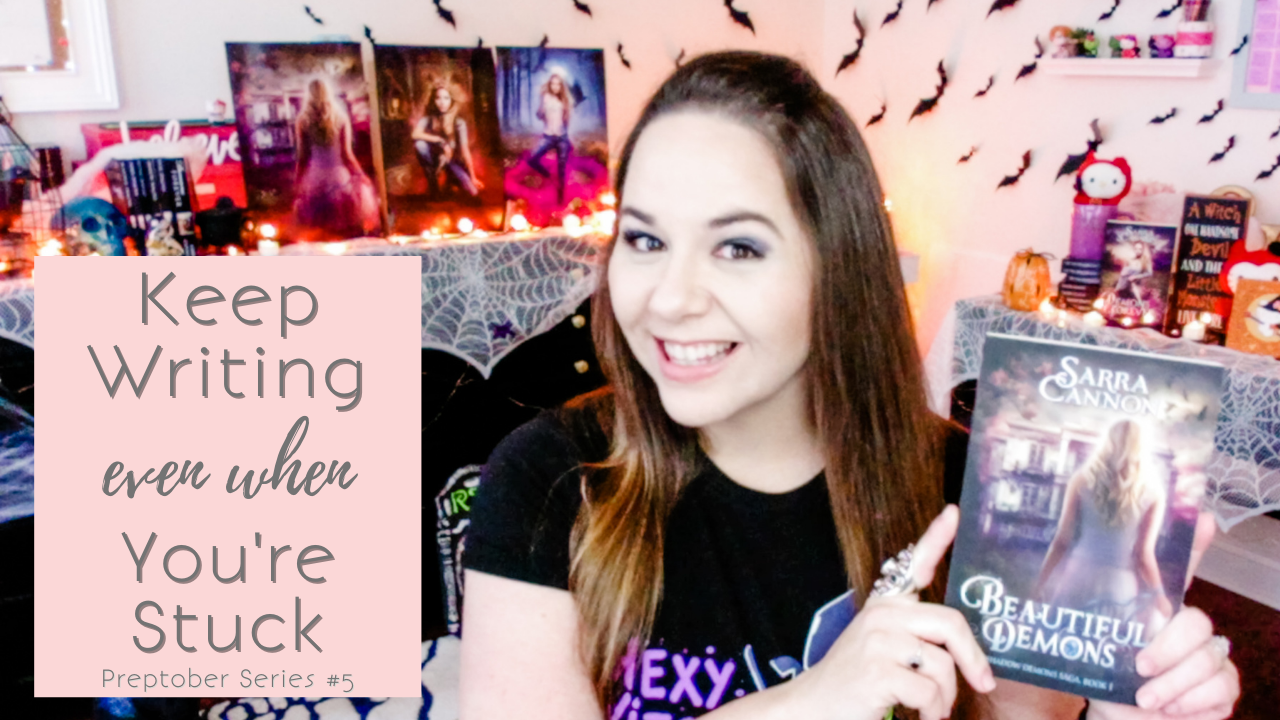 We only have a few days remaining until NaNoWriMo officially begins, so I wanted to take this last chance to give you some of my favorite tips for how to keep going when you get stuck.

I’ve participated in NaNo for more than a decade (including Camp NaNoWriMo twice a year), and I’ve written more than 26 novels throughout those years.

Believe me when I say that every single one of those books became a struggle at some point. There is always a time during the rough draft where I think I’ve written the worst novel known to man and that it will never come together.

There’s always a point where I feel stuck.

So, how do you keep going toward the finish line when you have those days where you can’t seem to figure out what happens next or you can’t find the energy to keep pushing through the hard parts?

Watch my video on my top 5 tips on How To Keep Writing When You’re Stuck here.

Hear me out on this one! I know that so many writers just can’t imagine writing their story out of order, but trust me when I say this has been the biggest help for me when I am feeling stuck.

So often, even if I don’t know exactly what happens in the very next scene or I’m feeling stuck on the next major plot point coming up, I do usually at least have some idea of what’s coming up later in the novel.

It can be a single conversation I know will take place between two characters, or it can be the big climactic moment of the novel. Anything you can see in your mind’s eye, or imagine might happen later, can help you move past the hump and get your fingers moving again.

I will often go in and just write “XX – I’m stuck, because I can’t figure out how Harper would react to this scene! Skipping for now, but I’ll come back in edits and fill in the gap! Jumping to the timeline after Act One!”

For me, the “XX” is a marker I put into my book when I want to make notes to myself. When I go back to start edits, I always begin by searching my manuscript for these double x’s, so I remind myself what scenes I skipped and where I have big holes to fill.

But when I’m drafting, if I’m stuck, moving forward to the next scene I know for sure or to a late scene in the book that I want to write, really helps me get unstuck and writing again!

Tip #2: Talk Through It With A Friend

I can legit spend a month trying to work through a story problem with no movement, but the second I give up on my own brain and tell my husband I need to talk through it all, the ideas start flowing again.

There’s just something about getting your thoughts out in conversation, rather than holding it all in your head, that gets the cobwebs out. I don’t know what it is!

If you’re stuck with your story, tap a friend or family member on the shoulder and just start talking about where you’re stuck. I think it must use a different part of our brains to actually speak about the story out loud, because this is a tried-and-true method for me when I am stuck.

Don’t have anyone you trust to talk to about your book? Try dictating your thoughts to Google Docs or turn your video recorder on in your phone and talk to yourself! It sounds cheesy but it actually works.

My husband is always laughing at me because even though he gives me tons of ideas when we talk through my stories, I rarely ever use them. He jokes and says he gives me terrible ideas so that I can uncover the really good ones in my own mind.

It really does help!

Where are my overthinkers in the house?

Ever since I was a little girl, I have been a “what if” person. What if I don’t win the contest? What if I misspell a word? What if I get sick and can’t go? And so on.

Well, who knew this persistent worrying as a child would come in handy when I started writing?

When I’m stuck, sometimes I find it helpful to play the “what if” game with my characters and their lives. First, I start by thinking about what matters most to my main character. What does she love most? What would be the most devastating thing in the world that could happen to her right now? What is standing in the way of her getting what she most desires?

As long as I know my character well enough to at least start to answer those questions, I’ll pull out a piece of paper and just start by writing…

Then, I’ll set a timer for 30 minutes and see how many what if statements I can write down before the timer goes off.

What if she comes home to find Jackson’s been kidnapped?

What if she loses her access to her magical powers?

What if she finds out something really devastating about her mother’s past?

And so on. I don’t edit myself at all. I just treat it like a game, where the point is to torture my character or complicate her life as much as possible.

You’ll be surprised at what comes up with this!

When the timer goes off, look at your list and see if anything there is worth exploring. Choose one of the ideas on your new list and just start writing. See where it takes you, and even if it’s not the direction you go in the final draft, it at least has your fingers moving on that keyboard again.

Tip #4: Find Out What Your Villain Is Up To

We spend so much of our planning and writing time thinking about what our noble hero is up to, but when you get stuck, something you might consider is checking in on your villain.

This tip might not be as helpful for romance authors writing books where there is lots of conflict but no real “villain”, but for everyone writing an actual antagonist (or group of antagonists) into your story, give this technique a try next time you’re feeling stuck.

Often when I’m feeling stuck in my writing, I will start a new chapter and simply title it “BTS: Priestess Winter” (or whatever my villain’s name is in this particular book). BTS just means “behind-the-scenes”, and I use the BTS term so I know in edits that these are not actual chapters that will go into my final draft.

This part of my writing isn’t for the readers at all, in fact. (Although it most DEFINITELY can still count toward your NaNoWriMo word count, since it’s still writing that’s necessary for your novel. Count ALL THE WORDS!)

For this exercise, I will step into my villain’s life and mind for a while just to see what he or she is up to. How is she taking Harper’s newfound independence? Does she know what Harper’s up to with Jackson over there? And if so, just what does she plan to do about it? What’s her end-game strategy?

Like I said, this journaling in my villain’s mind won’t necessarily make it into the book directly, but what the villain is doing and how she’s manipulating things behind the scenes is important to the story.

So many times, journaling in my villain’s point-of-view will knock some new ideas loose, and I’ll feel the spark to go back to where I left my heroine last.

I know, I know. This sounds an awful lot like procrastinating and NOT writing, but I promise when you do this with intention, it can help you to get unstuck!

Back when I was first learning to write, I took a workshop by Alexandra Sokoloff, and one of the things she recommended was to make a few different “Top 10” lists of books and movies (or games, fiction of any kind) that inspire you for your current work-in-progress.

If you find yourself totally stuck during NanoWriMo (or over the course of any novel-writing endeavor), try making a list like this. Name 10 movies, books, films, or games that either helped to inspire your current WIP or that share some kind of theme, setting, or premise to your current book.

Then, set aside a night to watch the one that stands out the most to you. I actually did this just recently when thinking through my upcoming novel, Fate’s Surrender. This is a zombie apocalypse story with fantasy and witchy elements, and part of the book takes place in New York City.

I turned to one of my Top 10 inspirations – Left4Dead on XBox. Playing through a couple of NYC campaigns in that game put me into the right mindset to see my characters in the city and fighting zombies. It shook something loose and a single spark of an idea from that game turned into me finally finishing the rough draft I’ve been working on for two years.

So, there you have it! Five of my top tips for how to keep writing when you’re stuck.

To me, just about the worst thing you can do is to give up or decide to take an extended break. Another bad move for most of us is to start a different story.

Trust me when I say that you could spend your entire writing life getting halfway through a story, deciding it sucks or it just isn’t coming together, and giving up to write something that seems better. If you do that, you know what you end up with?

About a dozen half-way finished stories and nothing that’s actually even made it to the editing phase – which in my opinion is where the real magic happens.

Everyone’s stories hit a rough patch at some point in the process. We all get stuck. We all think our stories are the worst.

But as long as you don’t stop writing, you’ll also hit a point where you see that your ideas are actually really good sometimes. You’ll edit the bad parts and feel things come together in a way that just fits.

We all get stuck.

The key is not to stay stuck.

Starting this weekend, I’ll be posting a daily vlog on my YouTube Channel for each writing day in November. The NaNoWriMo Diaries will be an inside look at my process as I not only write the first draft of a new book, but also edit and publish the final draft of another one.

It’s going to be wild and fun, and I’m sure I’ll get stuck somewhere along the way. I hope you’ll be there to help cheer me on, because I’ll definitely be cheering you on the whole way through!

I’ll see you there, starting this Sunday for the kick-off as I prepare my final plotting notes for the big adventure ahead!

How To Write More During Camp NaNoWriMo
Why I Write In Google Docs (Instead of Scrivener!)
How I Use My Traveler's Notebook and Hobonichi As A Writer