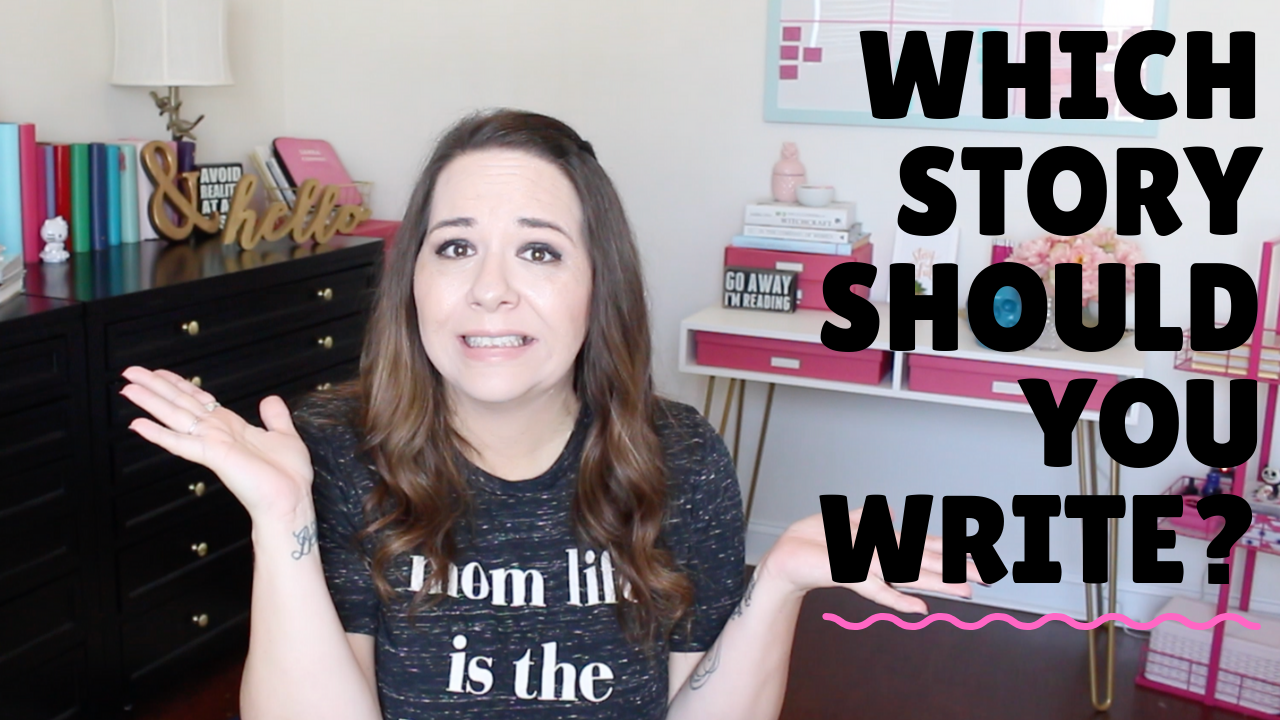 Which Story Idea Should You Write?

Choosing which story idea is the right idea can be really difficult! Especially when you have a LOT of great ideas. How do you know which one is going to be the best one?

In today’s video, I’m giving Six Tips to help you choose which story idea you should write next.

My Six Tips For Choosing Your Best Story Idea

Tip #1: Write out a synopsis of each idea

Take out one piece of blank paper for each of the main story ideas you’re considering writing next. At the top of each page, write out the tentative title and the basic premise of each story.

Then, take each story idea one at a time and write a full page or two of what you know so far about the story. What’s the conflict? Who are the main characters? What is the setting? What makes this story world interesting?

If you can’t seem to come up with many ideas about one story, but a different story is just flowing like crazy and the ideas are coming so fast you can hardly keep up, it will start to become clear which idea is best for you.

Also, it’s good to take into consideration whether you are intending to write a stand alone novel or a series. If you really want to write a series, you’ll want to evaluate your different ideas to see which one has the most substance and has enough conflict to justify an entire series of novels.

When you think about all those story ideas you just wrote down, which one gives you butterflies? Which one lights you up and fills you with ideas?

The level of excitement you’re feeling toward the characters or the story world is a good indication of which story will be best for you to write.

Tip #3: Write the most vivid scene that comes to mind

When an idea is tugging at you, it’s likely you also have a few scenes that play through your mind like a movie. Choose one of those vivid scenes and start writing.

Do this for each of the main story ideas you’re trying to choose between. You can either set a time limit and write until the timer goes off, or you can give yourself as much time as you want. The key, though, is to discover which idea flows easiest when it’s time to write. Which story world becomes so real in your mind that it just flows from your fingertips?

If you started with a lot of ideas, you’ve hopefully narrowed them down to just a few by now. If you have several contenders that still feel exciting and are flowing really well when you write them down, it might be a good time to look at the market.

First, ask yourself what path you’re likely to take with this book once it’s finished. If you’re simply writing for fun and have no plans to publish, this tip won’t really apply to you, but most of us want to try to sell our books or get them in the hands of readers in one way or another.

Something that can help you choose the best idea is to look at the current market. What’s popular among readers right now? Are vampires back on trend? Or is contemporary the most popular thing? Go to Amazon or Apple Books, Kobo, Google Play, or Barnes & Noble and look at the top selling books in your genre(s). What’s selling? What are readers currently gobbling up?

It’s also helpful to think about what types of tropes or themes are always popular. For example, if you have one vampire story and one story about trolls, you could take into consideration that vampires are traditionally more popular than trolls.

My biggest warning here is that while it’s important to think about the market, it’s almost always better to write the story that really lights you up. However, if you can find the most marketing story that lights you up at the same time, it’s a win-win situation.

Tip #5: Run the idea by other people

If you’re still stuck after all that, why not try running the basic premise of your idea by some other people? While I wouldn’t recommend testing it with a thousand random people in a Facebook group, I think it can be valuable to run the idea by a critique partner, friend, family member, or a small group of loyal readers.

Which idea makes other people light up and say, “Oh my gosh, I want to read that!” Chances are one of your story ideas will resonate more than the others.

After making your way through all the previous tips, if you still just can’t decide, it’s time to just go with your instincts. One way to “trick” yourself into finding out which story you most truly want to read, deep down, is to write all the story ideas on small pieces of paper, fold them up and put them in a hat.

Choose one at random and as you go to open it, check yourself to see if there’s one particular story you’re really hoping will be on that piece of paper.

That’s the story you should write!

Ultimately, you can’t go wrong when you trust yourself and your own intuition.

In the end, without a magical crystal ball or a trip into alternate futures, there’s no way to know for sure which story or series idea is the best. All you can do is explore these ideas and go with the one that makes the most sense for you and is most likely to lead you toward your own idea version of success and joy.

Is choosing a story idea something you struggle with? Comment below and let me know your tips for choosing, if you’re struggling to decide, or where you are in the writing process now.

How to Write Faster & Win NaNoWriMo (Preptober)
A Moment in Time [The NaNoWriMo Diaries]
How To Edit Your Novel | Part One: Self-Edits