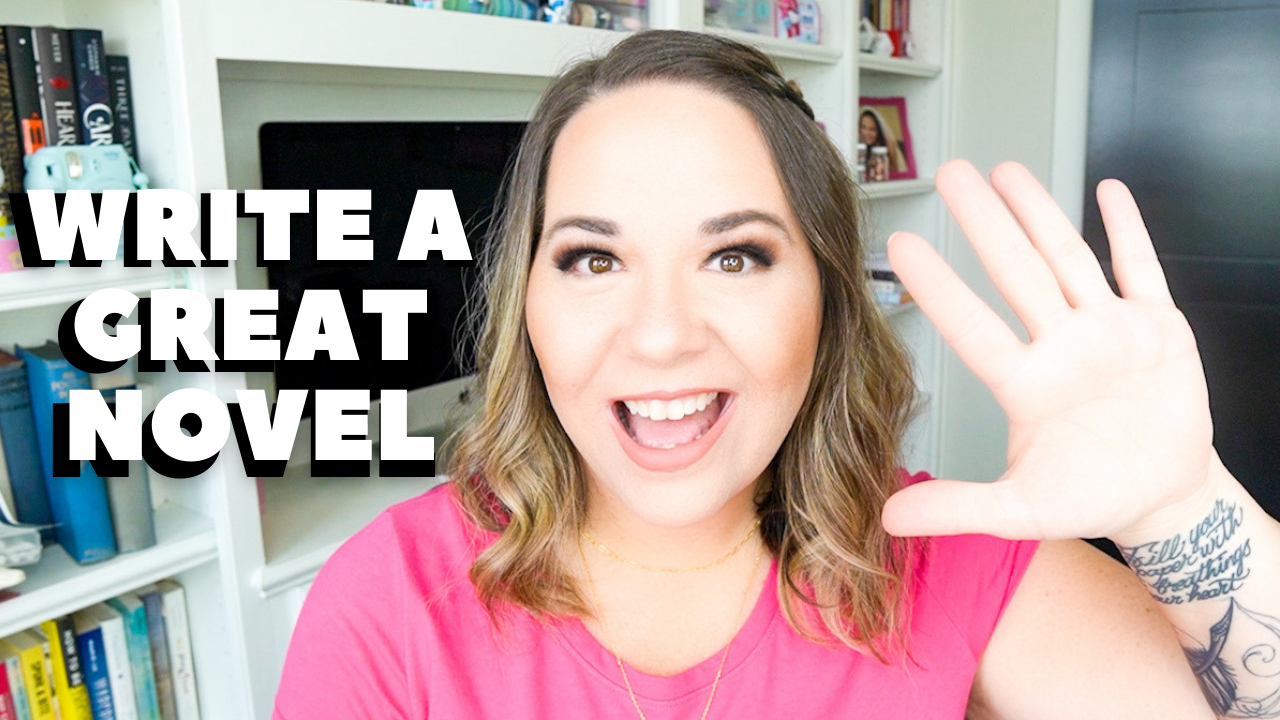 5 Crucial Elements of a Good Novel

As we get closer to Camp NaNo starting, I thought it might be valuable to talk about what I believe are the FIVE most crucial elements of a great book. As writers, we have so much to learn and so many pieces of storytelling that need to come together, that it can often feel overwhelming. Where do we even start?

In my opinion, these five elements of storytelling are the absolute most important to focus on. So, let’s talk about what they are and why they’re so important in great writing.

Watch My Video On The Elements of A Great Book

Read On For All Five Elements

We all know there’s a lot that goes into writing a great book. We have to brainstorm ideas, choose the one we feel is big enough (and good enough) to warrant an entire novel or series, and then we have to actually write it and hope it’s got all the elements it needs to dazzle and entertain our readers. There’s a lot of nuance when it comes to what readers will love and what makes you as an individual an amazing storyteller.

However, I feel there are certain elements that every novel needs in order to make it great. Today, I’m going to share those five crucial elements to make your novel the best it can be. Each one of these larger elements will have its own sub-elements, and when I started putting this video together, I thought it might be fun to later do a full series on these, so make sure to like this video and comment below if you’d like to see an in depth series of videos on this or similar topics.

1 – How to Hook Your Readers

A hook is something in your narrative that literally hooks the reader’s attention. It can be the very first sentence, or it can be something that happens in the first few paragraphs, but a great hook generally needs to happen quickly to introduce a question in the reader’s mind about what’s going to happen in this story.

With so many other forms of entertainment grabbing everyone’s money and attention these days, I think it’s more important than ever to have a great hook. Some examples of a good hook can be a story that begins in the middle of an action sequence, a single line that grips your attention, an atmospheric description that pulls you in, or reference to the hero’s current dire situation. Something that immediately introduces a clear question in the reader’s mind or makes them care about what’s happening.

2 – Characters Your Readers Care About

Obviously, this goes for the main character, because we, as readers, will spend the majority of our time with that person, but it also goes for the villain or antagonist of a story. In fact, I think caring about, or caring about what happens to the characters, is the most important element in a reader loving and not being able to put down a book.

When it comes to writing great characters, that has its own elements. Backstory, a wound or ghost, and the characters’ Goal, Motivation, & Conflict, to name a few. It’s also important for characters to be acting in alignment with who we’ve set them up to be. Readers will stop caring about a character who isn’t consistent in who they are, so it’s important for writers to know their characters well enough to know how they would act in the situations we put them in inside the novel. This is where GMC becomes important, and I know many of you have requested a detailed video on how to figure out GMC, so make sure to comment if you’re interested in that.

Conflict is whatever the character (or characters) has to overcome in order to get to the end of the story. It’s opposing forces. It’s “what’s in the way” of your hero or heroine getting what they want. So, if your story is a mystery, the conflict is usually going to center around whatever is standing in the way of your investigator finding the truth or catching the killer. Without compelling conflict, there isn’t a story, really.

Conflict is what provides tension in your story, and when you combine that with characters your reader cares about, you’ve got them reading late into the night every time. Of course, the next element is also a major part of providing tension: stakes.

4 – Stakes That Really Raise the Bar

The stakes in any novel are the consequences. What happens if the hero fails? Ultimately, the reader needs to be clear on what your protagonist is trying to accomplish in this story (Goal), why it matters to them (Motivation/stakes), and what’s standing in that protagonist’s way (Conflict). The motivation part is often where the stakes come into play, because the protagonist should be highly motivated to avoid failure because of something very bad that will happen to them or the world or someone they care about if they fail.

Now, each genre has its own take on what’s bad. In a romance, the stakes are usually that the lovers will not end up together and they will miss out on what their life might have been. In a mystery, the bad thing is that the villain or killer will get away. Often, by the time the novel is coming to a close, the stakes have gotten more intense because it’s not just that the villain will get away with it, it’s also that they will kill again (and maybe it’s our protagonist who will die).

A great novel will see the stakes or consequences of failure ramping up and getting worse, or more intense, as the story goes along. Then, when the story reaches that final set of scenes, it will truly seem like all hope is lost and the unthinkable is about to happen. Sometimes the best way to think about stakes in your story is to ask “What’s the worst thing that could happen to my protagonist?” and go from there.

5 – The Resolution That Fixes Everything… or Does it?

In order for your reader to feel satisfied, a great story needs a resolution. The antagonist is defeated, the lovers live happily ever after, the truth is revealed, and so on. With a dynamic series, however, the resolution is not going to be a forever kind of thing. Instead, the resolution will just be a “for now” answer or defeat with some things still left to deal with.

Now, some people love to say that a story left unresolved has a cliffhanger ending, but this isn’t fully how I think of it as I’m writing my own series. My fans have lovingly renamed the ends of my books as “Sarrahangers” but in truth, I always resolve the main action of that particular book or mystery. Then, just as you think it’s all going to be okay, there’s a new hook that leads the reader into the mystery or action of the next book.

There’s always some kind of resolution, however. For example, in my book, Emerald Darkness, the villain has a goal that has massively high stakes for my heroine and the entire human world. At the end of the book, they successfully stop her from following through with that specific plan or goal and that particular plot is resolved. However, they don’t kill the villain and she escapes in order to create a new goal. Each book in my SDS series, then, has a similar thing – a mystery is solved or a villain’s plans are defeated, but it’s not a resolution to the entire series. It’s just a part of the journey, with each book in the series introducing higher stakes and greater conflict.

Overall, I truly feel this is why the Shadow Demons Saga has been as popular as it is with over half a million books sold so far. The more I write, the more I understand how these five elements work together to create a book that readers will be drawn into from that first page. I aim to give them an irresistible hook, create well-rounded characters readers care about, introduce conflict on every page, increase the stakes at every turn, and then give them a brief resolution before the next twist hooks them in all over again.

For me, these are the must-have elements to any great story or series, and if you can figure out how to do these things well, you’ll have a long, successful career as long as you don’t give up and you always keep honing your craft.

I hope you’ll join me by participating in Camp NaNoWriMo during the month of April. If you’d like to know more about what Camp is, check out last week’s YouTube video for tons of info!

Did you know we have an amazing group of more than 4,000 authors who write together live each week? Come join the Heart Breathings Writing Community and chat with other writers about these 5 elements! We also have multiple live writing sprints throughout the week. Read more about the group here.

Double Down Day is Saturday!

Planning Your Series (How To Plan & Write A Series, #3)
The Great Ideas Series: Brainstorming your Ideas
Keep Writing Even When You're Stuck (Preptober)