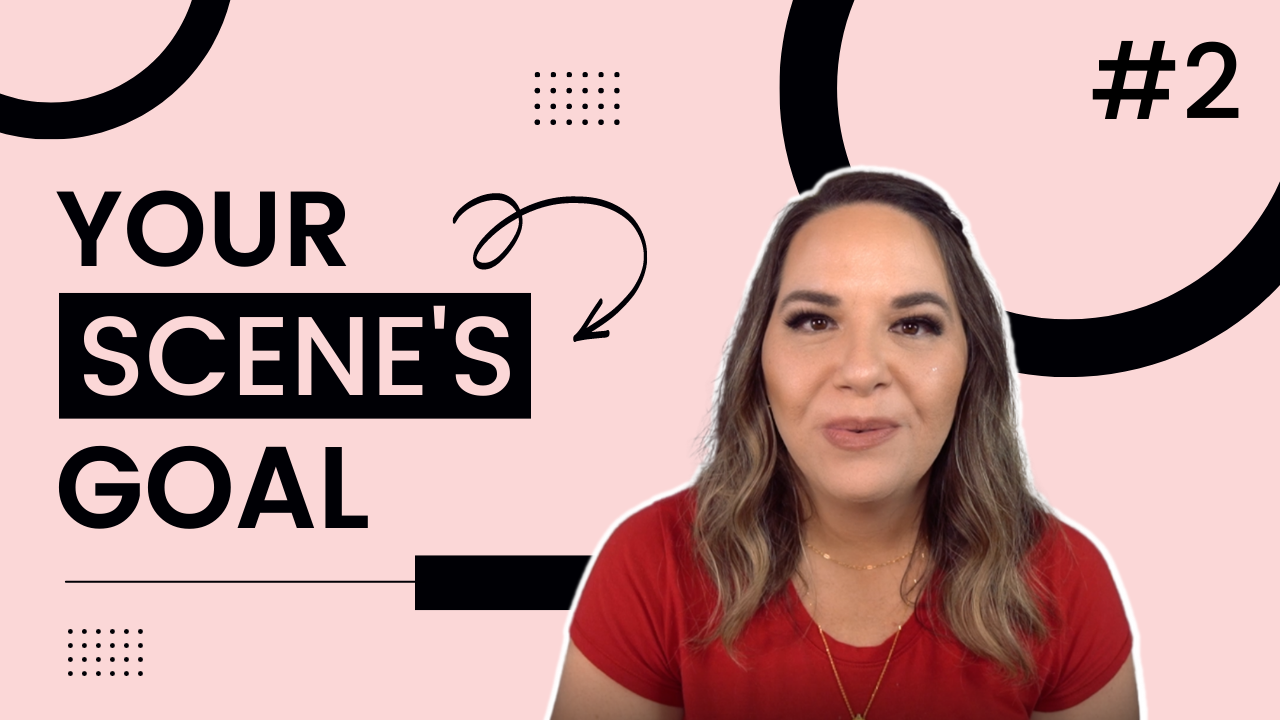 Your Character’s Goal or Desire In A Scene: Writing Great Scenes #2

In all good scenes, your point-of-view character will have a goal or desire. Something your character wants. Today, we’re diving into character arcs, goals, and how these work together to create an engaging scene for your readers.

This is part 2 of my series on great scenes. To check out the first video and post, go to Writing Great Scenes #1 here.

Keep reading or head over to YouTube to watch today’s video!

In your overall novel, your character is going to have a goal (or a series of goals). Each scene in that novel is going to contain a kind of mini-goal for your character, as well. Something like a stepping stone toward that bigger novel-worthy goal.

They’ll either be trying to make a decision about something, trying to get something physical, looking for information or clues, trying to win someone over, trying to escape or get to a new location, or any number of goals.

Your character’s desire can be something overt or something more subtle, but it needs to be there, and there needs to be some kind of consequence if they don’t get what they want.

First, The Reader Needs To Care

First of all, when it comes to your characters (especially your main POV character or characters), your reader needs to have some reason to care about what happens to them. I hope to do a full series on characters in the future, but for now, we’ll generalize and just say that you need to give your reader reasons to care about what’s happening in this story world, and usually the best way to do that is to tell the story through the eyes of a character who has something big at stake.

Right from the start of your novel, the reader needs to get a sense of who your character is and how they’ll need to change or what they’ll need to overcome to achieve a successful outcome at the end of this story. We do this, of course, within the context of scenes.

Similar to the way I talk about goals and projects or tasks in HB90 where a goal is the outcome you want but the project and tasks are the steps you’re going to take to achieve that outcome, your plot is going to center around a big, overarching goal and then you’re going to break it down into small, bite-sized scenes. Each scene is going to move your character closer to their goals – both inner and outer.

A few questions to ask yourself about your character

Every scene should impact your character in some way relative to their desire. Maybe it causes them to change their plans or to see something differently than before. Maybe it gives them an idea about where to go next or what else to try.

If you can write scenes that make it clear to your reader who your main character is and why they should care about what this person has to lose, you’re on the right track. Then, as the story progresses, continue to increase the intensity of what’s at stake and the obstacles your character has to face to achieve success, you’ll have them turning pages late into the night.

Now, one more note about characters and character arc here is that one popular structure of writing scenes is to pair them into a sequel and a scene. This was a concept introduced by Jack Bickham in his book, Scene and Structure, where he says that story structure is all about cause and effect, stimulus and response. So, when a scene causes something to change or your character to recalibrate, you should have a moment of pause or reflection. This is often an emotional sequel to the action or impact of a scene where your character reacts to what just happened (often emotionally) and makes a decision about how to move forward from there.

I’ll talk about this more when we get to scene structure in a future video, but I wanted to mention it here because this idea of taking a beat after the action (or twist or big change or failure of a scene) for your character to react is a powerful way to pace your scenes and transition from one to the other, giving every scene more emotional impact.

If you’re writing a story with multiple point-of-view characters, it can often be tough to decide whose POV you want for a scene that contains several of your characters together. One suggestion I have after years of writing multiple POV is to really think in terms of the scene’s goal and place in the overall storyline. Which character’s goal serves as the most effective frame for this particular scene? Who has the most at stake in this scene? Which character will be most affected by the outcome or disaster at the end of the scene?

Those questions often help me decide whose eyes to show a certain scene from.

I hope this look into characters in each scene was helpful. Sign up for my newsletter to get reminderes for when I post the next episode! Don’t forget to grab my free workbook that I created just for this series, as well.

My self-publishing course, Publish & Thrive, opened for enrollment this week, and I would love to have you come and join us! If you’ve been thinking of self-publishing or publishing and just not seeing the kind of results you want, this course can completely change your life!

If you’re interested in joining, you can purchase either Publish & Thrive as a standalone, or my Thriving Author Bundle which includes my HB90 Bootcamp (you will benefit even more from P&T by combining it with my 90-day planning method). Click here to read more.

Hope to see you there! Registration will be open until July 30th and the class will start later that day with a live Kick off call.

The Different Types of Series (How To Plan & Write A Series, #1)
How To Join and Win NaNoWriMo
7 Tips For How To Stay Focused While Writing